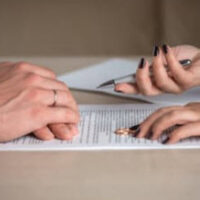 In theory, California’s community property laws should make divorce simple.  According to California law, when a couple gets a divorce, each spouse gets one half of the marital property.  There is still plenty of room for disagreement over the value of marital assets, whether a certain asset is marital or separate, and whether one spouse needs spousal support.  Things can get truly ugly, however, with regard to marital debts.  If you are mad that your ex walked away from the marriage with half of your money, think about how mad you would be if you were stuck paying half of the debts that your spouse racked up through irresponsible spending or unwise business decisions.  A San Jose divorce lawyer can help you resolve disputes about whether debt incurred by your ex-spouse is a separate or marital debt.

Cynthia and Richard married in 2000 and lived together in Modesto; Richard worked at the YMCA throughout the marriage.  In 2009, Cynthia purchased a paint-it-yourself pottery shop for $175,000.  Since her record keeping was exceedingly poor, if not intentionally misleading, it is impossible to tell whether the business ever became profitable, but Cynthia took out several loans to keep it afloat.  She also worked a variety of part-time jobs.  During the marriage, Cynthia told Richard very few details about the financial performance of the business or the money she borrowed to fund it.  By the time Cynthia and Richard divorced, the business had a negative value, but its exact amount was difficult to ascertain.

In March 2015, the couple separated and Richard moved to Orange County with the parties’ daughter, who was in her teens.  Richard filed for divorce soon after.  During their divorce case, Cynthia wanted the court to classify her debts related to the pottery shop as marital debts, meaning that Richard would be responsible for half of the debt obligations.  Richard wanted the court to classify them as separate debts, since Cynthia had borrowed most of the money without his knowledge.  (The courts sometimes categorize financial dishonesty of this magnitude as marital misconduct.)

The judge who decided the couple’s divorce case remarked that Cynthia used the business like a “piggy bank.”  At the court’s requests, she presented some profit and loss sheets she had created in QuickBooks, but she had no documents to back them up, so it was impossible to tell if they were accurate.  She used the business bank account for numerous personal expenses and deposited money into it from her other jobs when she could.  Richard offered to pay Cynthia $950 per month in alimony, but the court refused to order it because the judge could not be sure if Cynthia needed it and how much she needed.

If you are fed up with your spouse borrowing money for businesses that are going nowhere, a divorce lawyer can help.  Contact Foster Hsu for help today.

By Foster Hsu, LLP | Posted on October 11, 2021
« Is It Fair For The Court To Make You Go From Multiple Mansions To Zero Alimony In Four Years?