Can A Divorce Court Require You To Sell Your Marital Home? 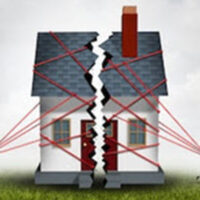 California’s community property laws, which instruct family law courts to divide a couple’s marital property evenly in half during a divorce, usually make things simpler, but sometimes they can make matters more complicated, too.  Most states follow the principle of equitable distribution, which just means dividing the marital property in the fairest way possible, but this leaves plenty of room for conflict, because fair is a subjective term.  California has managed to avoid the problem of interpreting the word “equitable” on a case-by-case basis, but some assets, such as real estate properties, are not so easy to divide in half.  The simplest solution to this problem is for the spouse that stays in the former marital home to pay the spouse who vacates an amount of cash equal to half the value of the house, whether in a lump sum or in installments.  In some cases, though, the best solution is to sell the house and divide the proceeds.  Seeing the house that you previously thought of as your forever home become just another asset to fight with your ex over is stressful, to say the least.  If you are in this situation, a San Jose divorce lawyer can help you.

The Husband Who Refused to Maintain the Marital Home, So the Court Made Him Sell It

In their 15 years of marriage, Hossein and Ninoosh had one child together and opened four businesses, one of which was a graphic design business and the others of which sold medical, dental, and pharmacy supplies.  In 2012, having built a successful business empire, they were able to purchase their dream home, a Los Angeles mansion valued at $2.85 million.

By the end of 2014, they had nearly a million dollars of equity in the house, but on December 23 of that year, Ninoosh filed for divorce.  When Hossein found this out, he removed most of the funds from the couple’s eight business accounts and reduced the credit limit on the couple’s credit cards, leaving Ninoosh unable to pay the mortgage or other household expenses.  By the end of six months, the family was $30,000 behind on their mortgage payments, and numerous other bills had gone unpaid.  In August 2015, the court ordered Hossein to pay the past due mortgage payments and to keep all the other household expenses current; it ordered him to pay for the mortgage, utilities, property taxes, and garden and pool maintenance.  Hossein apparently ignored the court order for six months.  In February 2016, the court ordered the couple to sell the house, and it declared that, before the proceeds were divided in half, Ninoosh should take $300,000 from the sale to pay for her attorneys’ fees and relocation costs.  Ninoosh was to have the final decision over which buyer’s offer to accept.

A San Jose divorce lawyer can help you if you and your spouse are at an impasse about selling the marital home, as this is often one of the most conflict-ridden aspects of California divorce.  Contact Foster Hsu for a consultation.